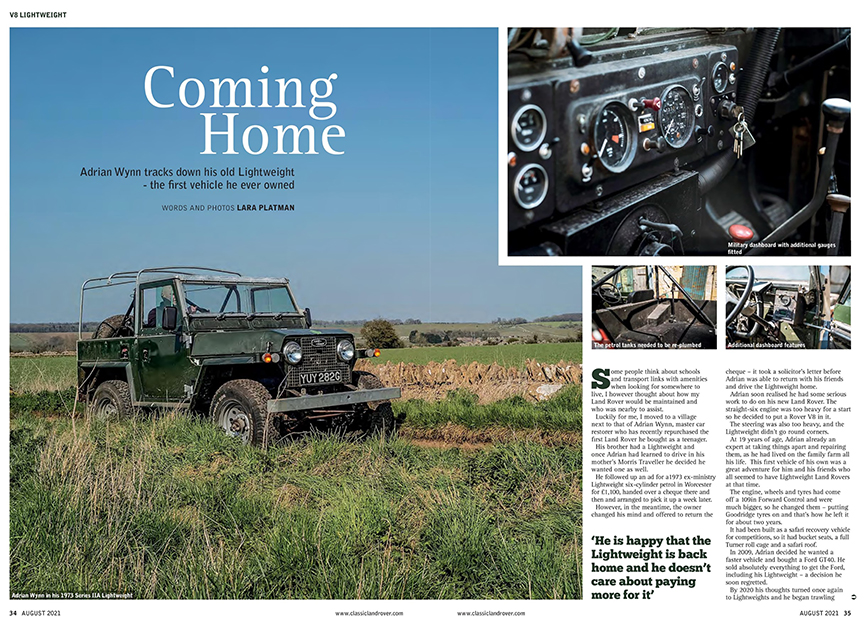 Always delighted to see my work in print. This is my first contribution to Classic Land Rover magazine. Now working on my second. As always the words are at the bottom and you can see the photos on my website . 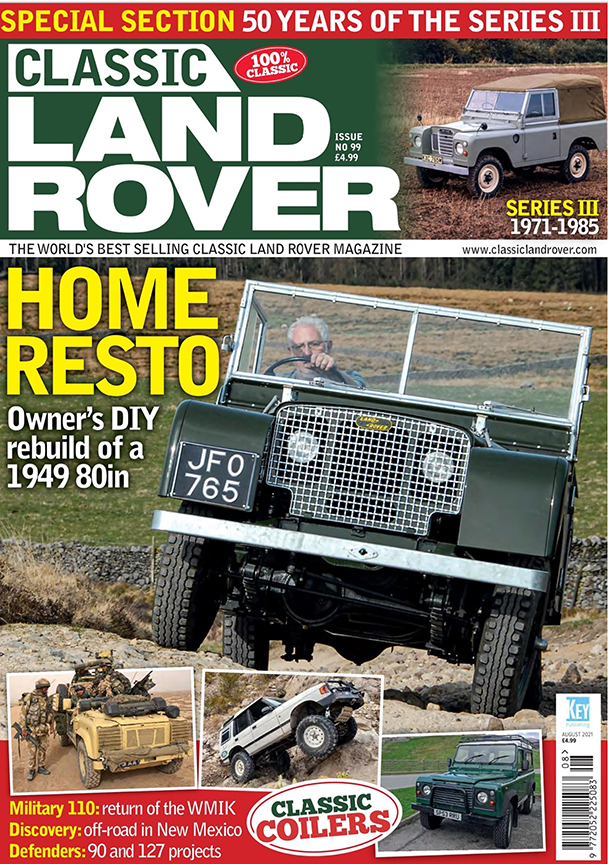 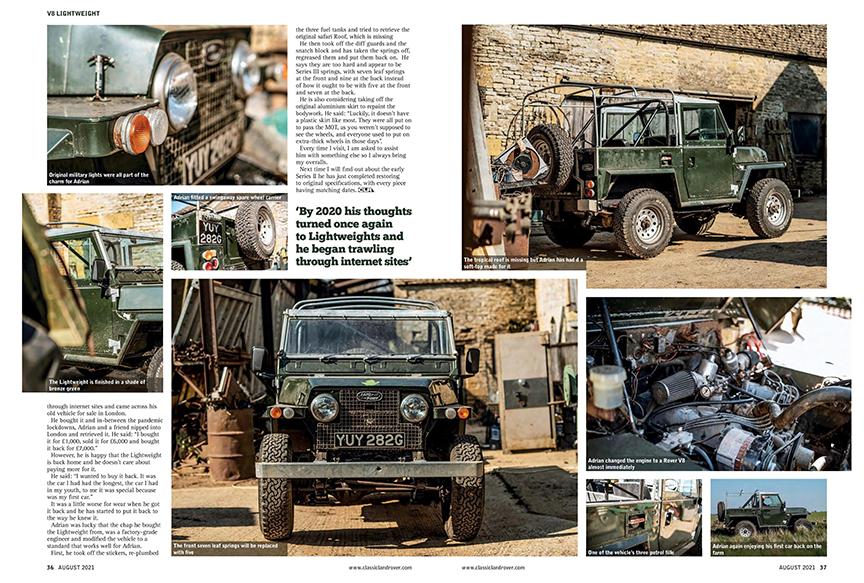 Sometimes people think about schools and transport links with amenities when looking for somewhere to live, I however thought about how my Land Rover would be maintained and who was nearby to assist. Luckily for me I moved to the next village of Adrian Wynn, Master Historic Car Restorer who, has recently repurchased the first car he bought as a teenager and let me take a look.

Sitting amongst original letters and documents from the Series IIA Lightweight that Adrian bought in 1985 from scouring the Friday Ads in the local paper, I find out how Adrian, now accustomed to working on concours vintage vehicles, still has a place in his heart for this rather ‘mixer’ of a Land Rover.

After learning to drive on his mother’s Morris Traveller, his brother had already a Lightweight and Adrian wanted the same, so when he pinpointed the ad for a,

he knew he needed to get there straight away, giving the chap a cheque there and then and arranged to pick it up a week later. However, the guy who Adrian says obviously had ‘better offers’, said it was no longer available and wanted to give the cheque back, to which Adrian sent a ‘solicitors’ letter saying that it was now the property of Mr Wynn… to allow Adrian then to return with his friends and drive the Lightweight home.

“You know that hard left-turn up Fish Hill, where it gets tighter and tighter? Well, it didn’t go round the corner”.

When Adrian got home, he realised he had some serious work to do on the purchase. The engine was too heavy for a start. It had a straight six engine, he decided to put a Rover V8 in it. The engine was too heavy, the steering was too heavy, and it didn’t go round corners. The Lightweights were built to be lightweight they were meant to go be slung under helicopters, dopped from parachutes, to be lifted up by the Wessex helicopter of the time. They were built to be stripped down,

“You can take about nine inches of the body off it all the way round”.

At 19 years of age, Adrian already an expert at taking things apart and repairing them, as he had lived on the family farm all his life and was the go-to person to repair any farm equipment with a ramp for major works, from an early age could drive, always wanting to make things go faster.

“Farming had no money in it,” he says.

So, he was always fixing their own equipment and machines from other farms, he later went to for training at agricultural college and later as a mechanical engineer but this, his first own vehicle was a great adventure for him and his friends who, all seemed to have lightweight Land Rovers at the time. His brother bought a Lightweight before him and that was brilliantly original which is why he wanted to get his own.

Adrian didn’t want to modify it any further because it already was modified to a good standard, and he said,

“No one back then restored the Land rovers like they are doing today”.

The engine and wheels and tyres had come off a 109in Forward Control and were much bigger, so he changed them – putting Goodridge tyres on and that’s how he left it for about two years.

It had been built as a safari recover vehicle for competitions, so it had bucket seats full, Turner roll cage, Safari roof, aluminium panels, with black vinyl coated full lined with MGF seat material of the time, an overhead console with the windscreen extra light switches on the dashboard much to the surprise to Adrian as the advert didn’t mention any of this.

“In those days we would go to the petrol station every Friday to pick up a copy of the local ads, no photographs no internet, so it was just luck that I spotted this one”.

Alas, Adrian was thinking faster and decided he wanted a GT40 and sold the Lightweight in 2009, he sold absolutely everything to get the Ford and whilst the Supercar still sits in his garage, so now does the Lightweight once again.

“I wished I never sold it and had been looking for it ever since”.

At last, in 2020, Adrian bought back his beloved Lightweight, he had started thinking about buying a Lightweight again and looked on internet through various sites, (and it was whilst on his wife’s Facebook page that he spotted his old one).  It was for sale in London, so he set about trying to track it down. I know for a fact that Adrian has only recently joined Facebook in his own name!

“An Italian had bought it, and was asking advice on how to repair it, generally to a forum. I replied and he had no idea that I knew that very same Lightweight”.

The thing is, when Adrian sold it to a friend, he told him if he wanted to sell it that Adrian would have it back – but he sold it on, to somebody else and this third party had it sold it to the Italian who eventually put it up for sale about 18 months after he saw it and started asking questions.

He thought the beloved Lightweight was now in the depths of the Italian Riviera and a long-haul journey would be required, but strangely it was being stored in London.  So in-between the pandemic lockdowns, Adrian and a friend nipped into London and retrieved it.

Adrian looks at all the tax discs to get some indication of the owners and locations, Evesham 2009, Shepton Mallet 2012, then it goes to online Tax and the history gets confusing.

Adrian’s smile when he piles over the paperwork is infectious, he really is happy that the Lightweight is back home, he doesn’t care about paying more for it.

Why did he want it so much when now he restores Series One’s, a plethora of historic marques such as E Types and even a Victorian windmill from a neighbouring farm?

“I wanted to buy it back. It was the car I had had the longest, the car I had in my youth, to me it was special because was my first car I bought. I did all sorts of stuff with it scrambling, trialling had at university did the M25 & M40 motorways, with all my friends, we all in all we went all over the place”.

I think it is clear to say that the return of the beloved has indeed invoked all those memories, even though I learn that the series lived in a barn for about 17 years when Adrian was at engineering college.

“I suppose I have been telling my children about this car that it was a huge part of my life”.

When we walk around the yard and see such beautiful examples of Land Rovers being restored, I ask Adrian but now surely, he is going to restore this to some concours condition just as others (he helped me restore my 1964 Series IIA – which gets invited to be on show in all sorts of delicious places).

But no, Adrian insists he is only going to get the utter mess that has taken its toll on the Lightweight and get it back to how he sold it.

Standing chatting, Adrian gets me to hold a rod as he plays with the fuel pump playing up, we continue our conversation with me by the engine and Adrian in the vehicle, I was lucky that I managed to find Adrian at desk to start with I suppose.

Adrian, however, has allowed the Lightweight to stay completely mixed,

“but it’s been modified deriguer of the time”.

Modifications were made purely to make it work for each job. Also, Adrian bought it back worse for wear and has started to get it back to the way he knew it. First things first he took off the stickers, replumbed the three fuel tanks, has tried to retrieve the original Safari Roof, which seems to be missing now,

“I’m going to put a canvas hood on it – ask Undercover Covers to make me a new cover from old stock”.

Adrian and I have always discussed the new waterproofing treatments used on canvases today, simply not nearly as good as those original ones, it’s a health and safety issue we know but a conversation every time is had about these mouldy things. He has found me a recipe I am going to use on my canvas at least, we’ll see how long it lasts for.

“This is a GS military vehicle and not and Radio vehicle where they would have had harder springs”.

He is considering taking off the original Aluminium skirt to repaint the bodywork,

“Luckily, it doesn’t have a plastic skirt like most, they were all put on to pass the MOT, as you weren’t supposed to see the wheels, and everyone used to put on extra thick wheels in those days”.

Adrian was indeed lucky that the chap he bought the Lightweight from, was a factory grade engineer and modified the vehicle to a standard that works well for Adrian.

Every time I visit, I am asked to assist him with something else, always bring my overalls I have learnt. Next time I will find out about the early Series II he has just completed restoring to original specifications, with every piece having matching dates, I will have to bring my waterproofs, because I know I will be asked to clean it.

Begin typing your search above and press return to search. Press Esc to cancel.